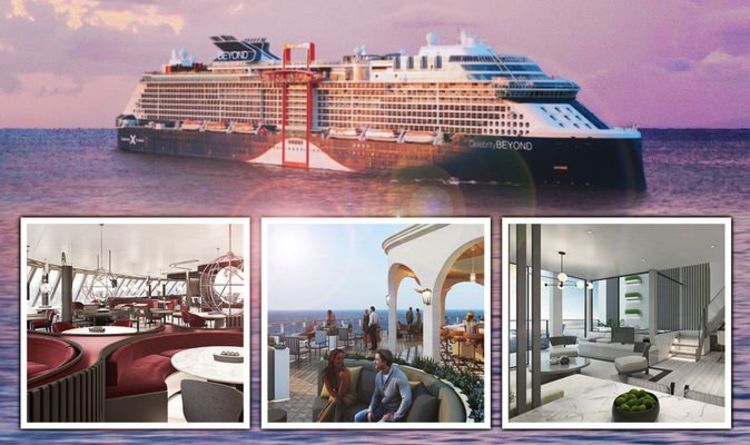 Celebrity Beyond is the third in Celebrity Cruises’ hip and happening Edge Series but it’s a little longer and taller than sister ships Edge and Apex to provide more outdoor space for guests and an extra 179 staterooms and suites. Designer Kelly Hoppen shook up the cruise industry with her sublime interiors for Edge and she’s given Beyond the same treatment, with an additional twist.

Lead architect Tom Wright dubbed the original Edge as simply “a prototype”, which is why Beyond is bigger: longer and taller, with an additional deck.

The stylish Rooftop Garden is bigger with a proper stage for bands and “spoilers” to direct sea breezes away from guests and the adjoining Rooftop Garden Grill is also larger. And the main Resort Deck is also bigger, with unrestricted views out to the port side and two-deck high cabanas on the other side of the deck that create a sophisticated and intimate vibe.

But it’s Gwyneth Paltrow who is the new Wow factor, starting as Wellbeing Advisor for Beyond and “curating”, as she describes it, a programme for all Celebrity’s ships that includes Women in Wellness classes in partnership with goop.

“At goop, our curiosity leads us to explore different approaches to well-being and sends us around the world, reporting on the best places to eat, drink, engage, and unwind,” she said.

“Near the nexus of these interests, we came across Celebrity’s mission to disrupt the traditional notion of being well-traveled. As Celebrity’s new wellbeing advisor, I’ll be working with my team at goop to bring onboard some of our favorite practices and tools for deepening wellbeing and joy.”

Beyond is a “sanctuary at sea” with “more space to lose yourself” according to the marketing message. Relaxation is at the heart of the ship’s mission and while guests are not expected to wander into restaurants in ripped jeans and baseball caps, neither do they have to dress up to the nines.

Although the whole ship is beautiful, the Retreat for suite guests is particularly gorgeous and Kelly Hoppen describes the 40 per cent larger Retreat Sundeck as “creating solitude spaces, zen areas, where people can chill”. There’s also a 25-yard lap pool on the top deck, which is not only unusual for a cruise ship but indicates the health-conscious lifestyle promoted by Celebrity Cruises.

All the stateroom and suite interior designs have been “refreshed” for Beyond, with bedding and artwork updated, says Kelly Hoppen: “Its more about the textures, colours accessories – it’s tiny details.”

Beyond has 179 additional staterooms and suites compared to Edge and Apex, which both take 2,918 guests. Balcony staterooms on these two earlier ships extend to the water’s edge at the click of a button that hides the glass doors, with sea views from 90 per cent of all the staterooms, so Beyond is likely to have something similar.

What we do know is that suites will include two-storey villas with private plunge pools.

Luminae at the Retreat is the private restaurant for The Retreat guests, which is found on all Celebrity vessels except its expedition ships, and its menu is also created by Boulud, with interiors by Kelly Hoppen.

For Beyond, Hoppen admitted “I’ve let myself go wild in that space” to create different nooks and places within Luminae.

“I wanted people to be in that restaurant and feel that they needed to book it for the next night so they could be over here, or there,” she explained.

Bars mentioned included the Martini Bar in the Grand Plaza, in the heart of the ship, and both the lounge and the bar will be bigger than on the Edge and Apex. Similarly, the specialty restaurant Rooftop Garden Grill will be bigger and the Sunset Bar at the back of the ship will be multi-terraced, making it 180 per cent larger.

Celebrity Beyond will make its maiden voyage in April 2022, sailing from Southampton before home-porting in Europe for Mediterranean and Greek island cruises.

In October 2022 Beyond will switch to Fort Lauderdale for Caribbean cruises over late autumn and winter into spring 2023.