‘Where were you, Dana?’ UFC’s Cutelaba grabs rival Jacoby by... 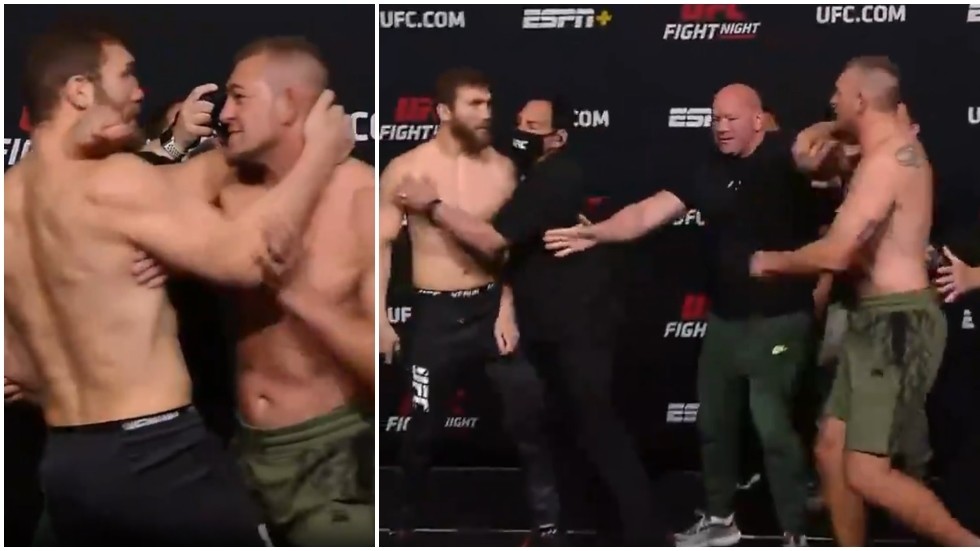 The UFC light heavyweight showdown between Ion Cutelaba and Dustin Jacoby will come with some added aggravation after the pair clashed at the faceoff in front of promotion chief Dana White.

Moldovan ‘Hulk’ Cutelaba stomped onto stage after weighing in on Friday at the UFC Apex in Las Vegas, shaking hands with White before staring down Jacoby – who was standing with fists clenched.

Unprovoked, Cutelaba grabbed his rival by the neck, pulling him towards him and exclaiming “you’re my bonus” before the pair were forcefully separated by security staff.

The scene played out in front of a startled White, who just last week criticized UFC match-maker Sean Shelby for failing to step in and stop the faceoff confrontation which forced Drakkar Klose out of his fight with Jeremy Stephens, after the American shoved his opponent, causing concussion and a cervical sprain.

“Come on,” White was heard saying after Cutelaba’s antics on Friday. “I was just ragging on Sean before I walked in here.”

A furious Jacoby screamed at Cutelaba “there’s no f*cking way he beats me tomorrow” as the pair were led away from each other.

Fans, fellow fighters and pundits criticized the scenes as getting out of hand.

“This is insanity. Especially after what happened to Klose. Commissions need to stop this nonsense. Look at how he grabs his neck,” complained ESPN pundit Ariel Helwani.

Others pointed the finger at White for not being quick enough to step in – particularly after he had chided Shelby for the same failure last week.

He wanted that lip to lip face off.Jokes aside, Cutelaba needs to be spoken too. He’s always up with antics at face off.

Cutelaba just grabbed Jacoby at the #UFCVegas25 weigh-ins, resulting in a shove and a pull-apartWhere were you on that one, Dana?

Cutelaba, 27, heads into Saturday’s contest at the UFC Apex on a run of successive defeats, having lost back-to-back contests with Russia’s Magomed Ankalaev last year.

He stands at 4-5 overall in the UFC after making his debut with the promotion in 2016.

Cutelaba is well known for his faceoff antics, previously painting himself green in a nod to his ‘Hulk’ moniker and also going viral for screaming into the face of Khalil Rountree before their fight in September of 2019 – which ended up being the last time Cutelaba tasted victory inside the octagon.

Jacoby, 33, is on a four-fight winning streak and boasts a 14-5 record overall, including two stints in the UFC.

He will arguably have added motivation to make Cutelaba pay the price in the octagon on Saturday night following the Moldovan’s weigh-in theatrics.

Also on rt.com ‘First fighter to win by TKO at the weigh-in’: UFC’s Klose ruled out of fight after ‘spraining neck’ in pre-fight push (VIDEO)