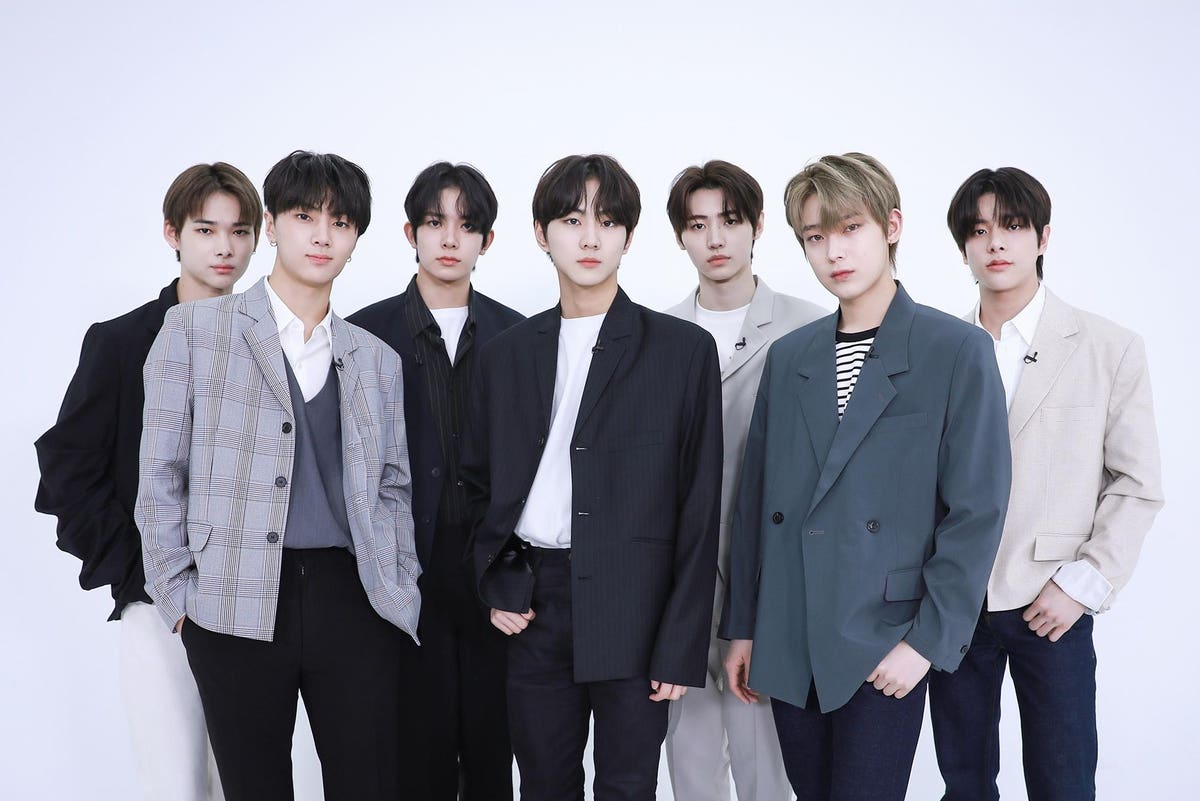 ENHYPEN’s video for Drunk-Dazed features the fast-rising K-pop boy group inviting guests to their “bloody birthday party.” The septet uses supernatural powers to cast spells, teleport and perform tricks in a blurred party. However, when it comes time to celebrate their real birthdays–specifically Sunoo’s June 24th in late June –the boys don’t act bloody. Instead they are brother-like and cheer for Sunoo while Jake rubs his shoulders.

Their Border : Day One album broke sales records in Korea, Japan and the Billboard 200. ENHYPEN’s initial months as an artist are notable for their dizzying and dazzling transition from stardom to superstardom. International fans love songs like “Drunk-Dazed”, “Given Taken” or “Mixed Up” because they are a mix of rock and electropop, but also serve as reflections on the group’s life experiences.

Continue reading to learn more about ENHYPEN, including their thoughts on the future, how they see it, and their feelings on horror films.

Jeff Benjamin: Sorry to be slow on SUNOO’s special day. But it’s great that we can talk. I have been following you since I Land and while we can talk about a lot, I want to know what you’ve done lately.

JUNGWONWe are currently preparing for our Japanese debut.Hakanai, BorderWhile we practice songwriting, choreography and producing music, we can be sure that our skills are up-to-date for the next step.

Jeff Benjamin: The one accomplishment that I could see the most was Border. It was Carnival‘s debut at No. 18. Your reactions were online. Can you share your feelings about the overall experience?

JAYWe have always imagined the Billboard 200 chart, so when it was announced we were out of our schedule.

JAKEThis was something that made us so happy for all our ENGENES around the globe.

SUNGHOONWe were also thrilled to be on other Billboard charts such as the World Albums or Artist 100. Our goal is to continue creating good music and repaying our ENGENEs.

JUNGWONAlthough we don’t yet know how to enjoy moments such as meeting fans and winning at music shows, these events serve as reminders that artists are making great strides and this is the new reality.

Jeff Benjamin: Does anyone feel that they have crossed the border between trainee and idol? Are you more at ease? Are there awkward moments still?

JAKEWe are still learning because this is only our second mini album. We gain strength as we travel more. Each stage is an opportunity to improve. We’re improving not only in singing but also as artists. We were honored to be invited to KBS’ midyear show.Music BankBecause I was told that only the top groups were selected this year, so we are very proud and excited to learn and improve from them.

HEESEUNGAlthough we are proud of the progress we’ve made, there is still much to do. We hope that you are looking forward to the next chapter.

Jeff Benjamin: We talked about your desire to be more involved in songwriting and music productions. What’s the progress?

HEESEUNGAlthough we have begun writing lyrics, we would love to produce music for the albums. However, we don’t really know whether the songs will be included on the final album. It’s just a test.

SUNGHOONIt’s a challenge to both write lyrics and produce songs.

JAKEWe just completed promotions, and started writing lyrics. HEESEUNG also produced music while he was training. I look forward to hearing what he has to offer. He will hopefully make his next hit song. It’s something I look forward to.

Jeff Benjamin: I know there are many people who feel pressure from their debuts, whether they be in big corporations or on survival shows. But it was refreshing to see you approach it artistically. Do you think this is something that you will continue to do moving forward?

Suno:Our debut album reflects complex feelings of our being at the edge of debut. Our second album was a collection of complex emotions we attempted to communicate while enjoying this new, complex world. Music that is relatable to everyone will continue to be our goal.

Jeff: With your Japanese debut, the excitement is back. What’s the general feeling?

NI-KI:ENHYPEN has been well-received by Japanese viewers. We have been hard at work since it is our debut in Japan. Three songs have been prepared.Hakanai, BorderThe Japanese version of “Forget Me Not”, which is a positive song that contains messages such as “Let’s move forward, lets overcome ourselves”. It will also be the theme song for Japanese animation.RE-MAIN.We are so happy and look forward to all the future.

Jeff Benjamin: Your new Japanese music is entering Japan. Do you believe you will follow the lead of your elders like BTS or Tomorrow X Together, and possibly record original English songs one day?

SUNGHOONAlthough we don’t yet have any plans, ENHYPEN was created by worldwide fans. We may be able to offer this opportunity for our many fans.

Jeff Benjamin: As you look at the Border video series, your last clip for “Outro: The Wormhole”, left with the words, “When do we awake at the tunnel’s ends, what vision awaits?” What vision is waiting for ENHYPEN?

Suno:[Laughs]It’s too soon to tell our next story, I believe. We will, however, try to keep our emotions in check. You’ll see us grow as artists, crossing that line.

Jeff Benjamin: You stand out because you embrace these darker and more disturbing themes, which is a unique feature not only in K-pop music but also all pop music. Could you tell us a little more about your relationship to these themes?

JAYIt’s a great thing that people have shown interest in our idea. The dark idea is one of many charms we have, and although it’s not the only aspect of them all, we are glad to be able embrace it.

JAKEIt’s a dark idea, and I like it. But ENHYPEN is open to all ideas.

Jeff Benjamin: Are you guys horror fans? Are you a fan of the vampire-style? Are there any horror TV or movies that you love?

JAKESUNOO, NI-KI and other horror movie lovers, watch them at night. The rest of us, however, can’t so we just block out our ears and stare away.[Group laughter]When the movie starts, we always enter the theater. We have to cover our ears whenever we enter the room. It’s impossible to see![Laughs]

Jeff Benjamin: Jeff, I’m not able to do horror. You two are insane. ENHYPEN: I would like to thank you and offer you the chance to share any other information with your international followers.

NI-KI:We are currently focusing on Japan and our official debut. Music-wise, we hope to continue improving and using our music to tell our stories. We will also communicate very well with our fans to make sure we are the destination of many ENGENEs, K-pop lovers out there.

JAKEThis year, we had the opportunity to meet a few ENGENEs in person. It’s disappointing for a group who debuted in this period of the pandemic that we are unable to travel internationally and connect with our fans. We hope that things will go smoothly and we can travel around the globe to see you all in person. There are many more things to come. Keep watching.