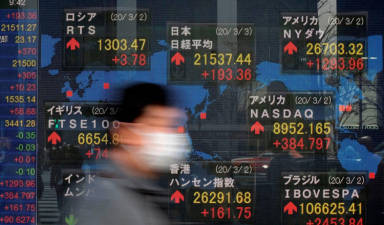 After last week’s rout — the worst since the financial crisis — equities have enjoyed something of a revival over the past few days as governments and central banks kick into gear in the face of recession warnings.

And while the worldwide death and infected toll continues to rise, China — the centre of the outbreak — is slowly grinding back to life after weeks of lockdown and quarantine that has battered the economic superpower.

In a bid to support economic growth the Federal Reserve on Tuesday slashed interest rates, with similar moves coming from Australia and Malaysia’s central banks.

Canada later joined the party and AxiCorp’s Stephen Innes said its reference to the cut being “in coordination with other G7 central banks and fiscal authorities” suggested the group were likely working more closely than thought.

Traders are now keeping an eye on the European Central Bank’s policy meeting next week as well as the Bank of England, Reserve Bank of New Zealand and Swiss National Bank.

Meanwhile, US lawmakers announced a rare bipartisan agreement to pass $ 8 billion in emergency spending to combat the health and economic fallout of the disease.

And the International Monetary Fund said it had $ 1 trillion in overall financing capacity, including $ 50 billion available without a formal programme, and $ 10 billion in no-interest funds for the poorest countries.

The move to action has lifted spirits on trading floors, helping take a bite out of last week’s losses.

The former vice president is seen as a more market-friendly option than his main rival Bernie Sanders in a run-off against Donald Trump.

While the virus continues to grip China, Bloomberg Economics said the economy — a crucial driver of world growth — was likely running at 60-70 percent of capacity last week as authorities appear to be getting a handle on the crisis, providing dealers with a little more cheer.

“From market perspective, the worst is likely to be behind us and optimism over the recovery on strong China stimulus in subsequent quarters outweighed the collapse of China economic activities in February,“ Ken Cheung, at Mizuho Bank, said.

A key beneficiary of the bounce is the yuan, which has recovered to levels not seen since January 23, just as the outbreak was taking hold.

The Fed’s closely watched beige book on the economy said that while activity continued to grow at a modest to moderate pace in recent weeks, the outlook was becoming more uncertain.

It added that businesses were growing concerned about a worsening of the outbreak and that “producers feared further disruptions in the coming weeks”. -AFP