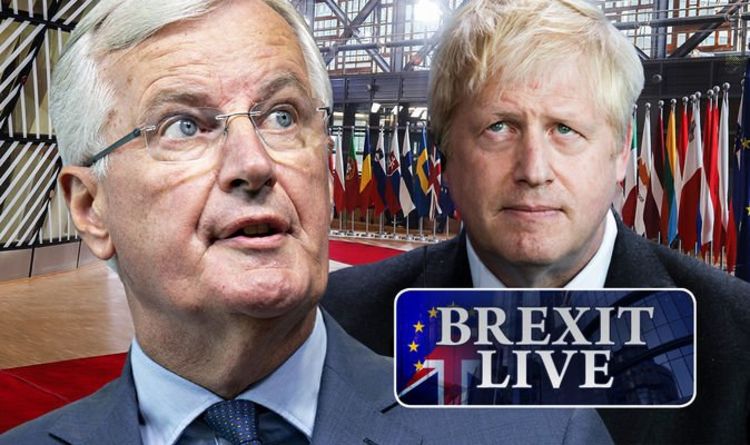 The EU’s head of Brexit negotiations sent a stern warning to Boris at the end of the first round of trade talks. The EU chief said trade talks had started well but would only be successful if the UK obeyed two key principles. He said: “I will just share with you two possible keys for success. Number one, not going back on our commitments.

Mr Barnier admitted there were “very, very difficult” points of contention in UK-EU negotiations, and asked Britain to “respect” the independence of the bloc.

But the chief negotiator also warned there would be serious “consequences” if a trade deal was not agreed by the end of the Transition Period in December.

9.55am update: Bentley – Brexit priority is EU, not US, deal

Luxury car company Bentley has said a free trade deal with Europe is its priority over an agreement with the United States.

CEO, Adrian Hallmark, told Reuters: As a luxury player with 24 percent of our sales in the EU and 90 percent of our parts purchases, it would help us greatly if we didn’t have to pay more for them or get less margin back for the products that we finish and send.”

Scottish Secretary Alister Jack has said the Prime Minister backs plans to build a tunnel under the Irish Sea, rather than a bridge linking Northern Ireland to Scotland.

He said a tunnel would solve the issues which have arisen when thinking about a bridge – including high winds and munitions from World War 2 dumped in the nearby Beaufort’s Dyke.

“The bridge for me is a euphemism for a link, which is a tunnel.”

FRENCH fishermen have been threatening the UK with a fishing “war” should Brexit talks end up with Britain regaining full control of its waters against EU vessels.

Regional Committee of Maritime Fisheries chairman, Olivier Lepretre, told Euronews British fishermen would lose out on a war with the European side of the industry should Brexit trade talks culminate in the UK regaining full control of its waters.

He said: “If we go to war, it’s quite obvious that the British will lose out on the European market. They will not be able to sell their products in France.”

9.00am update: Scotland must be ‘razor-sharp’ to influence EU, study says

Academics have said Scotland must have “razor-sharp priorities” to have any influence whatsoever in the EU.

University College London researchers have concluded that Scotland, as a small member state, will have to use “substantial resources” to exert pressure on the bloc.

Dr Kirsty Hughes, who led the study, said: “Smaller EU member states value their seat at the EU table and the vote and voice they have. But that’s not enough to have a big influence.

“Smaller states need to have razor-sharp priorities, be pro-active, constructive and get in early on new EU laws and policies.

“They have to be adept and flexible alliance builders with other member states, both large and small.”

Brexit means the UK can take back control over its own fishing waters, but documents uncovered by Express.co.uk have revealed the UK was once forced to reject Norway’s request to police its waters.

Back in 1982, there were numerous disputes involving fishing, including one in which Norway even requested to enforce Norwegian laws on their ships in UK waters.

Documents unearthed by Express.co.uk at the National Archives reveal a request from the Norwegian government to overfly part of the UK’s fishing waters to search for some of their own vessels.

8.25am update: Nigel Farage to ‘start new party’ as next Westminster crusade begins

NIGEL FARAGE’s career is not over now that Brexit has been delivered as, according to Lord David Owen, the former MEP is set to launch a new party and start a different crusade against Westminster.

The former Foreign Secretary and SDP co-founder told Express.co.uk: “Mark my words – Nigel Farage has a proven record of getting shifts of opinion in this country.

“He is going to launch some new party.”

8.00am update: Brexit has cost government billions of pounds so far

Preparations for Brexit have so far cost the government more than £4 billion, according to a spending watchdog.

The National Audit Office said the figure was reached by considering spending on advertising, staff and other areas such as advice.

A Treausry spokesman said the government made “all necessary funds available” to ensure Brexit is done and the country is prepared.

But Meg Hillier, chairwoman of the Commons Public Accounts Committee, accused the Government of keeping the public “in the dark” over Brexit spending.