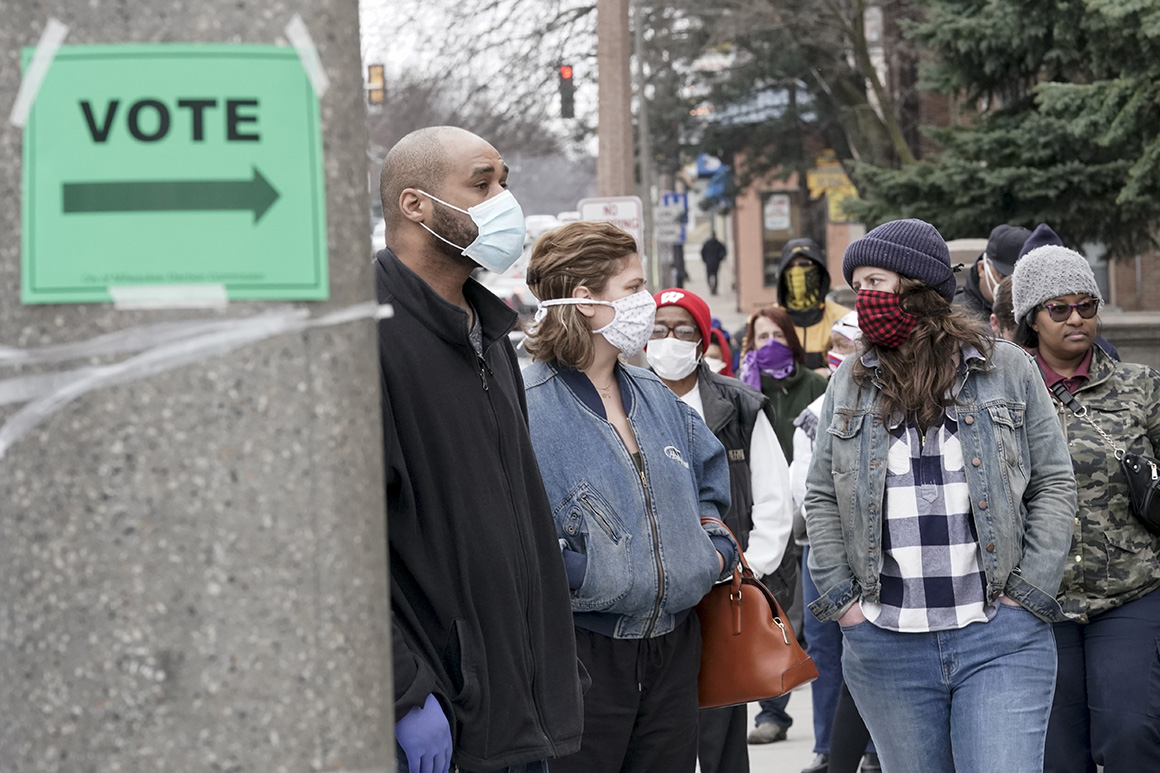 Democrats looked on in horror last week as thousands of voters in Wisconsin trekked to polling places and waited in lines for hours to cast ballots in the midst of a pandemic.

Now national Democratic party leaders are scrambling to head off a similar spectacle in November, in what promises to be the most consequential partisan struggle between now and Election Day. They are seeking billions of federal dollars to prepare for an election in which voters can’t safely go to the polls in person. The party is combing through voting rules, state by state, with an eye toward expanding early voting and vote-by-mail. The Democratic National Committee has deployed “voter protection directors” in 17 states to defend against what they view as moves to block access to the polls.

And the DNC is partnering with state Democratic parties to help voters navigate the process of obtaining mail-in ballots and combating what the DNC characterizes as “misinformation” from President Donald Trump.

With Republicans mounting a multi-million-dollar legal campaign to combat Democratic lawsuits to expand voter access — and Trump asserting without evidence that mail-in voting is ripe for fraud — the situation in Wisconsin has set off alarm bells among Democrats about their readiness for a battle that could determine whether Trump wins a second term.

“We need a federal and state-by-state strategy, and it starts with calling voter suppression for what it is,” said California Secretary of State Alex Padilla, president of the Democratic Association of Secretaries of State. Padilla then referred to a recent Fox News interview in which Trump said Democrats were trying to push voting reforms through Congress that “if you ever agreed to, you’d never have a Republican elected in this country again.”

“There is only one major political party in American that wants to create a scenario where there are limited, safe opportunities for people to cast their ballot,” Padilla added. “Trump himself has said it. They are not even hiding it anymore. They are talking about it openly and publicly.”

The clash over ballot access extends beyond which party might have an advantage if laws are changed to make it easier to vote remotely. The unruly scene in Wisconsin, with voters risking their health to cast ballots in person and loads of absentee ballots literally being lost in the mail, underscored the danger of the presidential election being viewed as illegitimate if similar problems occur.

Trump’s advisers have said they’re amenable to certain ballot access proposals, such as automatically providing absentee ballot applications to voters over age 65, but are opposed to more far-reaching efforts, saying they’re susceptible to corruption. Republicans also warn that a rush to change voting rules across the country could create chaos of its own, which the states are ill-prepared to handle.

“Their attempt to nationalize our elections through one-size-fits-all federal legislation is irresponsible. History shows that states struggle to implement comprehensive federal election legislation, and their proposal would create more chaos by forcing states into changes that they cannot manage.”

Democrats said the events in Wisconsin provided a snapshot of what they view as the GOP playbook for November: Drive down turnout, underfund the postal system in a bid to make it more difficult to administer a predominantly mail-based election, and delegitimize mail-in balloting.

“Think about what they were willing to do for an election for a Supreme Court seat in Wisconsin. Then ask yourself, what would they be willing to do in November?” said Marc Elias, who is representing the DNC and voting rights groups in dozens of voting access lawsuits. He was referring to claims that Republicans did not want to postpone the primary because doing so might hurt a state court justice up for reelection.

Reeling from the coronavirus outbreak, local officials in Wisconsin could not keep up with mail-in ballots requests and processing. The Republican-controlled legislature and conservative-led Supreme Court blocked attempts to extend voting deadlines and relax other absentee ballot requirements. As a result, scores of Wisconsin voters went to the polls in person because they did not receive an absentee ballot they requested, according to interviews and reports from public officials.

A day later, a postal service employee reported finding “three large tubs” of requested absentee ballots that were never mailed to voters. Both of Wisconsin’s U.S. senators demanded an investigation.

“They were not able or equipped to handle the number of absentee ballots they received,” Patrick Rodenbush, spokesman for the National Democratic Redistricting Committee, a Democratic-aligned group that works to expand voter access. “If you’re a state election administrator preparing for the fall, you need to be thinking now of how you’re going to deal with early voting and an influx of vote-by-mail.”

To that end, Padilla and other state election officials have convened calls with Pelosi and Democratic leaders to discuss strategy for the next stimulus legislation. Democrats secured just $ 400 million of the $ 4 billion they had sought for election assistance in the first relief package.

House Minority Leader Kevin McCarthy (R-Calif.) called the Democrats’ push for more money “disgusting” and a ploy to juice the vote to their advantage.

States fall on a wide spectrum when it comes to ballot access laws, and the battle lines between parties vary. Roughly half of the 17 states that require an excuse to vote by mail have relaxed them for primary elections.

In contrast to Trump’s stance, Republican officials from West Virginia to Kentucky to Iowa have moved to ease access to mail-in ballots over health concerns from the pandemic. Nebraska Republican Gov. Pete Ricketts last week urged voters to vote by mail in the state’s May 12 election. And voting rights advocates are encouraged that if the virus continues to wreak havoc in the fall, Republicans will do the same then.

In some states, like Wisconsin, that has meant attempts to overturn a law requiring witness signatures for mail-in ballots. In most of the battleground cases, Democrats are seeking changes to prepare for a big surge in mail-in ballots. That includes pushing for "drive-thru" voting, asking that mail-in ballots come with prepaid postage, and ensuring that ballots postmarked by Election Day are counted, as opposed to counting only ballots received by Election Day.

In several battleground states where there is divided state control, skirmishes over even the smallest details have ballooned into major points of contention.

In Michigan, Secretary of State Joyce Benson, a Democrat, said her state needs $ 40 million from the federal government to hold a mostly vote-by-mail election in November. Those funds would cover the cost of mailing applications and ballots statewide, including pre-paid postage and protection for poll workers.

In Florida, election supervisors are pressing Republican Gov. Ron DeSantis to accommodate more absentee voters, anticipating they might be scared away from the polls later this year. In North Carolina, a slew of changes are under discussion, including striking a requirement that a witness certify absentee return envelopes. Pennsylvania, where the appointed elections chief serves under a Democratic governor and GOP legislature, is exercising its first elections with so-called “no-excuse” absentee voting, meaning voters can request a mail-in ballot without having to meet criteria designed to limit participation.

And in Arizona, Secretary of State Katie Hobbs, also a Democrat, is grappling with a Republican governor and GOP-controlled state legislature. Hobbs has asked for authorization to allow counties to run an all-mail election.

“We have to have plans in place to make sure we can conduct the elections in a way that upholds democracy and upholds public safety,” Hobbs said. Responding to McCarthy’s criticism of Democratic funding requests to facilitate virtual voting, she added, “I think it’s disgusting that this has become a partisan discussion. And it’s at the expense of public health and it’s at the expense of democracy and people’s rights to vote.”

Democrats at the federal level are pushing to create national standards for vote-by-mail, online registration and in-person early voting via efforts in Congress. But Republicans cringe at any mention of an all-mail election or at the notion that laws should be uniform across the states.

For his part, Trump has made a point of panning absentee voting during his daily briefings, repeatedly charging, without evidence, that it’s rampant with fraud.

“Republicans should fight very hard when it comes to state wide mail-in voting. Democrats are clamoring for it. Tremendous potential for voter fraud, and for whatever reason, doesn’t work out well for Republicans,” Trump tweeted last week.

Clark, the Trump campaign attorney, said states should maintain primary responsibility for their voting laws, making changes where necessary and utilizing flexibility within their existing laws.

“Vote-by-mail options can certainly play a role during a pandemic by enabling at-risk voters to vote safely," he said. "But these options already exist in every state. For example, states should resist proposals that open the door to voting fraud such as mailing ballots to voters who haven’t asked for one.”

Reyna Walters-Morgan, who oversees voter access initiatives for the DNC, challenged Trump to back up his claim of fraud.

“If the president believes there is rampant fraud in this then provide the receipts, provide the proof,” she said. “The reason he hasn’t done that is because it doesn’t exist.”