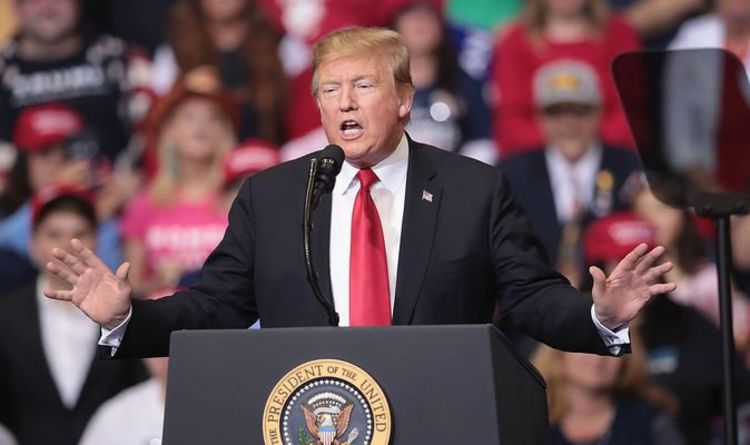 Congress found he abused his office by asking Ukraine to investigate former Vice President and the President’s biggest rival in the 2020 election, Joe Biden. Members have voted 230 to 197 in favour of the first article of impeachment. The second vote on whether the US President obstructed Congress in carrying out its investigation by banning witnesses and documents also passed by 229 to 19.

However, it is highly improbable that Trump will be forced from office.

For this to happen, he would have to be found guilty by the Senate, which is controlled by Republicans.

Many have already indicated that they will not vote for the President’s removal.

Democratic House Speaker Nancy Pelosi opened the debate on Wednesday with a speech from the floor of the House.

She said: “For centuries Americans have fought and died to defend democracy for the people, but very sadly now our founder’s vision of a republic is under threat from actions from the White House.

“If we do not act now, we would be derelict in our duty. It is tragic that the president’s reckless actions make impeachment necessary. He gave us no choice.”

During the House debate, Trump posted several tweets, calling the Democratic arguments “ATROCIOUS LIES BY THE RADICAL LEFT” and an “ASSAULT ON THE REPUBLICAN PARTY!!!!”.

The President was fiercely defended by fellow Republicans, who sought to cast the trial as illegitimate and unfair.

JUST IN: Impeachment meaning: What is impeachment, what does it mean for Trump?

Across the country in the 24 hours leading up to the vote, pro-impeachment protesters took to the streets.

Hundreds of people gathered in Times Square in New York on Tuesday night, chanting: “Tell me who’s above the law? Nobody is above the law!”

On Wednesday, Trump made a dramatic intervention in impeachment proceedings when he issued a blistering attack on the Democrats in a six-page letter.

The US President accused Democratic House Speaker Nancy Pelosi of partisanship and of turning the House into a medieval “star chamber”.

Trump robustly defended himself against charges that he abused the power of his office and obstructed Congress.

He ridiculed the Democrats’ allegations and warned that the public would punish the party in next year’s Presidential elections.