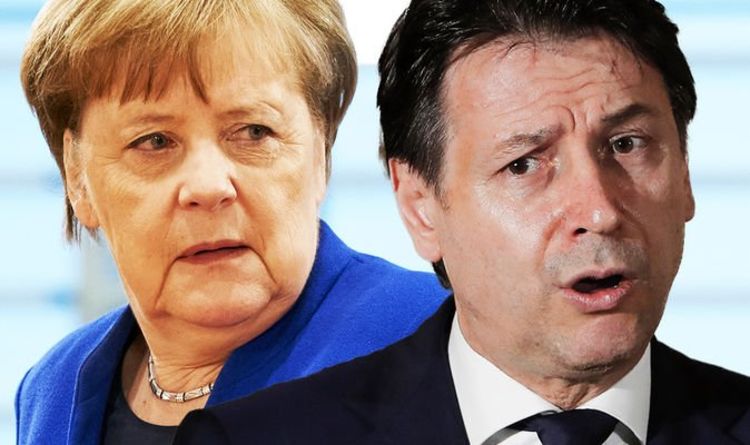 And Hans-Olaf Henkel suggested the best solution would be for Italy to leave the eurozone and go back to their own currency, which he dubbed the “new lira”. Mr Henkel was speaking against the backdrop of widening splits between the north and the south of the bloc, and particularly Germany and Italy, on how best to mitigate the economic and societal impacts of the virus.

Mr Henkel was also responding to comments by billionaire europhile George Soros, who last week suggested the EU had a duty to help Italy, which has been hit harder by the disease than anywhere else in the bloc, by spreading the cost of rebuilding the country’s economy among members of the eurozone.

The former MEP explained: “I share Soros’ views on Italy but do not believe that there is any justification to show ‘financial solidarity with Italy because of the corona crisis’.

“What have Germans to do with the decisions taken by Italian politicians on their health system or the (very late) decisions on the lockdown in Lombardy?

“On average the per capita wealth of Italians is way above the wealth of for instance Germans.

“So, before Italian politicians like Salvini or Conte or anybody claims money from citizens of other countries to mitigate the financial results of their decisions they should ask their own wealthy people to show solidarity with their own people.

“At that time I advocated the euro to be split into a ‘Northern Euro’ and a ‘Euro for the South’, in each case the currency to reflect the different economic realities prevailing in, for example, Greece, Italy and France on one hand and, for instance, in Austria, The Netherlands and Germany on the other.”

Addressing a proposed solution – “forever bonds”, in other words, loans which would never have to be repaid, he added: “Soros’ idea of eternal European loans may work on a national basis like they did in the UK and in the US in World War 1, but they would not work on a European level.

“Not only would we be confronted with the same moral hazard such as in the case of euro- or coronabonds, they would also be limited to the eurozone hence create a new border within Europe.

“On one side are those with solidarity for Italy like Germany.

“On the other are those without like Denmark or Sweden or Poland, none of them being in the eurozone.

“The real bombshell severely damaging the EU did already go off: Brexit!