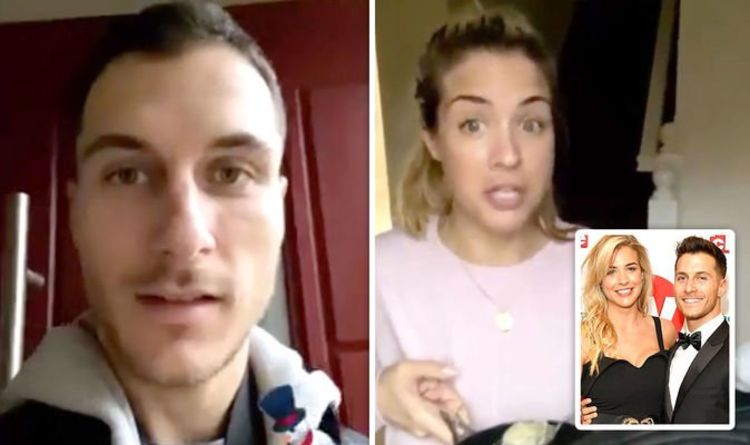 Gemma Atkinson jibed Strictly Come Dancing beau Gorka Marquez over his attendance at the The National Television Awards 2020 in London tonight. The actress explained that she would be looking after their baby daughter instead, in an Instagram video he shared with his 499,000 followers.

The professional dancer, 29, will no doubt be on hand to support the BBC show, which is nominated in the Best Talent Show category.

The father-of-one did not say who he would be joined on the red carpet by, as many of the Strictly stars are currently on the live tour.

Many will be performing this evening at Dublin’s 3Arena and in Belfast tomorrow and Thursday.

However, Gemma, 35, couldn’t resist getting a cheeky remark in as her other half set off for the capital.

Despite his exciting plans, Gorka was far from eager to leave the ex Hollyoaks beauty and six-month-old Mia.

“I’m off to London and this is currently the weather,” he started in the clip, before turning the camera around to show his view.

“So it’s snowing,” the star continued, revealing his wintry driveway from inside the warmth of his house.

Gemma then appeared behind him clutching her breakfast, which he explained made it even harder to set off.

Gorka did not say anything though as she did a cheeky dance but he did draw her attention to the snow in his hair.

“Nice,” she told him, before helping him dust it off. He replied: “Love you,” before they shared a kiss.

Tonight Strictly will go up against Britain’s Got Talent, Dancing On Ice and The Voice Kids, after picking up the gong in 2019.

However, none of the Strictly panel are nominated for Best TV Judge, with David Walliams, RuPaul, Simon Cowell, Sir Tom Jones and will.i.am all