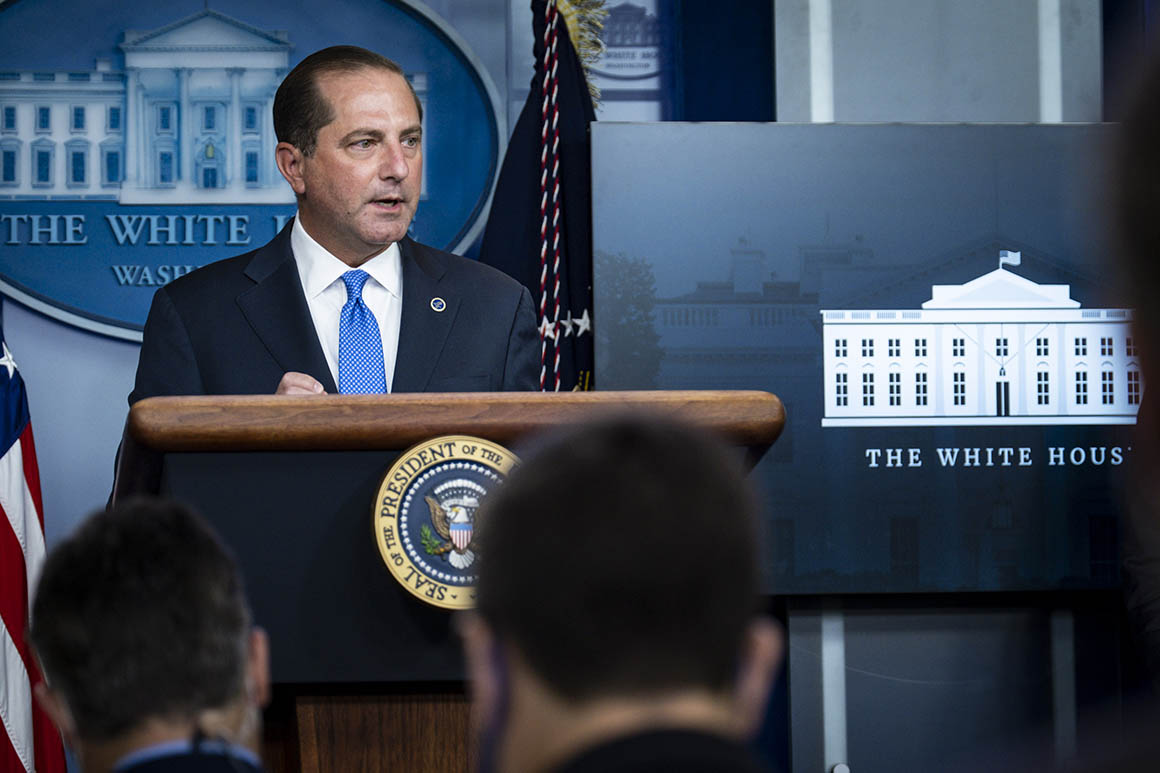 Although Azar said it was unclear when the data from those studies would be reported, he argued that “if we get a vaccine, we need to be ready to distribute that.”

CDC Director Robert Redfield wrote in a letter to governors last week that federal health officials “are rapidly making preparations to implement large-scale distribution of the Covid-19 vaccines in the fall of 2020.”

He “urgently” asked states to assemble a “fully operational” plan for providing vaccines to the public by Nov. 1 — two days before the election — and he promised that any preparations “will not compromise the safety or integrity of the products being distributed.”

Pressed on how the CDC selected its target date, Azar denied that the decision was politically motivated and deferred to Dr. Nancy Messonnier, the agency’s director of the National Center for Immunization and Respiratory Diseases.

“You’d have to ask Dr. Messonnier, because that came out of the career people at CDC working to do the planning here,” he said. “It has nothing to do with elections.”

Public health experts have expressed concerns that administration officials might pressure the FDA into fast-tracking approval of a vaccine before the conclusion of Phase 3 trials — pointing to the agency’s controversial issuing of an emergency use authorization for convalescent plasma after coming under attack from President Donald Trump.

Meanwhile, FDA Commissioner Stephen Hahn has repeatedly sought to reassure Americans that the eventual vaccine will be safe and effective, even as he remains locked in a feud with HHS leadership over the administration’s coronavirus messaging.

At a news briefing Thursday, White House press secretary Kayleigh McEnany insisted that “no one is pressuring the FDA to do anything.”

“This president wants to break through regulatory barriers to get a vaccine to the American people as quickly as possible because lives are at stake,” she said. “But he will not in any way sacrifice safety and making sure that this is 100 percent airtight for the American people [who] receive it.”

Dr. Anthony Fauci, the nation’s top infectious disease expert, also told CNN in an interview Thursday that Americans should not be worried about politics affecting the vaccine approval timeline.

“I don’t think so. … I mean, the FDA has been very explicit that they are going to make a decision based on the data as it comes in,” he said, adding that the results of the trials as viewed by independent monitoring boards “will ultimately become public.”

“I think that we can have some confidence and have faith in what the FDA is saying,” Fauci said.

The potential vaccines’ Phase 3 trials can take months to complete, and definitive results about the candidates’ efficacy are not expected until late October at the earliest. Nevertheless, the White House’s rhetoric on vaccines has become increasingly optimistic.