Ronnie Wood: Rolling Stones star opens up on addiction in... 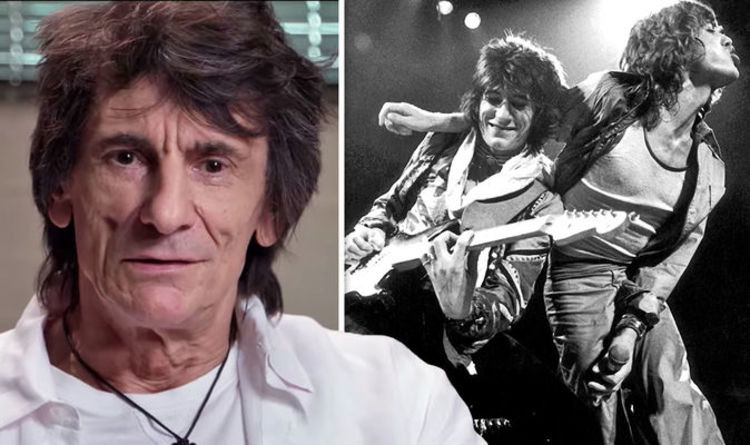 Ronnie Wood: Somebody Up There Likes Me released a new trailer today, giving a glimpse at what fans can expect from the upcoming documentary. In the clip, the guitarist told the camera: “I was in the hands of destiny all my life and being the right place at the right time.” It went on to address the musician’s struggle with addition, having entered rehab six times in the past 20 years, and his recovery.

Among those interviewed for the documentary are the his Rolling Stones bandmates Mick Jagger and Keith Richards.

At one point, Jagger notes Wood has had quite a life, adding: “Sex, drugs and things like that — drinking…”

Looking back on the Rolling Stones star’s addiction, his close friend Damien Hirst spoke about taking his friend to rehab in a bid to aid his recovery.

“I went to see him after he’d been in the rehab about a week and he was pals with everyone,” he said in the trailer.

“He got out and I got him a little studio, got him some paints and canvases as well. Doing something like that, you bond.”

“I just feel that if you’re talking to a sober person, you’ve got the real person.”

Wood’s typically mischievous humour was evident in his approach to the more difficult aspects of his past when he was asked if his excesses “got him into trouble”.

“I wouldn’t change anything except I’d do it with my eyes open a bit more, he told the cameras.

The father-of-six has been sober for nine years and talks in the documentary about staying sober.

In clips obtained by The Mirror, he said: “It’s very difficult because you go through a period of dry and you go, ‘I’ve done it. I’ve cleaned up now. I can have just one.’

“And that is a big mistake because you can’t just have one. I probably like things too much, which is harmless for some things like music but harmful in ways like dope and drink.”

Humphries noted: “You can’t just think that it is not there. I could creep up at any point, so that is a big deal for us.”

She went on to explain how her famous husband uses classes, rehab, AA meetings and mediation to help him stay sober.

“We were all well aware of Ronnie Wood,” he remembered. “It was almost as if it was predestined in a way.”

Another rock legend who made an appearance was Rod Stewart, who recalled the guitarists signature out there style, saying: “Crushed velvet trousers, big crosses, bouffant hair and a little bit of makeup — what is all this?!”

Ronnie Wood: Somebody Up There Likes Me is released in selected cinemas Novemeber 26.