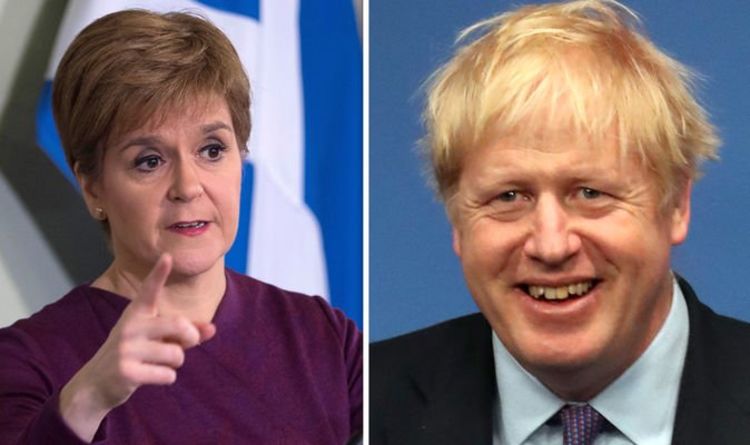 Fears that the UK could unravel have become subject of urgent discussion. At the end of last month, Scottish First Minister Nicola Sturgeon sent documents to Prime Minister Boris Johnson, outlining her case for indyref2, arguing that she now has an “unarguable” mandate after the SNP won 48 of Scotland’s 59 seats in the December 12 general election. However, this morning, the UK Government formally rejected her call.

Ms Sturgeon tweeted that the Tories were attempting to “deny democracy”.

As a constitutional stand-off between the Prime Minister and Ms Sturgeon now seems more inevitable than ever, a 2016 report has resurfaced, which could blow a hole in the SNP’s attempt to use Brexit to manufacture support for independence.

Almost six months after the EU referendum, Jim Sillars, the party’s former deputy leader, told the Telegraph his contacts in the SNP Holyrood group had told him “five or six” members had voted to leave the bloc in June.

He added that he was also told they would not go public because life would become very difficult “if you go against the leadership”.

According to the report, Ms Sturgeon attempted to play down the disclosure in the Telegraph that Alex Neil, a former minister in her administration, had voted for Brexit.

She claimed it was “no surprise” and also questioned his claim that more SNP MSPs had told him they would do the same.

Mr Neil told the publication that he made the decision to leave around 10 days before the referendum, as he questioned why rule from Brussels would be better than being part of the union.

The former health minister said he had since been approached by “a number” of Nationalist MSPs who voted for Brexit.

Mr Sillars, a close ally of Mr Neil who contrary to the SNP position campaigned for Leave, said he believed the figure was five or six, but he did not disclose their names.

Tory MSP Adam Tomkins said the former Cabinet minister’s admission blew a hole in the SNP’s attempt to use Brexit to manufacture support for independence.

He explained: “As he says, he was among 400,000 of Nicola Sturgeon’s supporters who backed Leave on June 23.

JUST IN: How PM discussed ‘forcing out’ Iraqi leader with US President