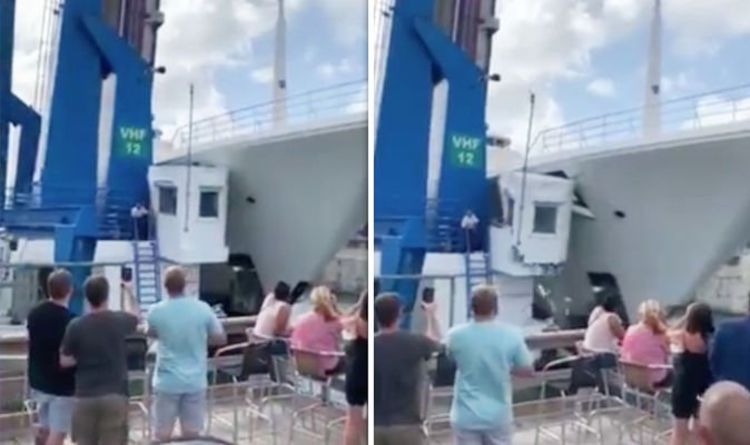 Other features are a deck jacuzzi, gym/exercise equipment, air conditioning and WiFi connection on board.

The superyacht also has a helicopter hangar on the forward landing pad and is capable of a top speed of 30 knots.

It is currently owned by Monaco-based Alshair Fiyaz who is said to have a net worth of £3billion, reported sueryachtfan.com.

Those travelling onboard both ships in the Vancouver port took to social media to document the drama, with some reporting “crunching sounds” and others heading onto the deck to witness the incident.

Brexit travel warning: Britons could face visas like US and Canada as no deal exit looms

ByTravel across Europe for Brits is currently free but that could change after January 1, 2021, an expert has claimed. Managing director of Haslemere...
Read more
Travel

ByThough mainland Spain remains off the travel corridor list, with Britons still subject to a quarantine period upon their return home, holidays to the...
Read more
Travel

ByRaphael Minder and Geneva AbdulLISBON — Long before the coronavirus swept across Europe this spring, many cities had been complaining that a proliferation of...
Read more
Travel

ByThe small island is also home to some fantastic coastal roads that are perfect for long drives. Express.co.uk has rounded up five of the best...
Read more
Travel

Travel pictures: Five of the most bizarre buildings in the world from Canada to Dubai

By“It’s difficult to keep up with quarantine restrictions. In some cases they’re not there when you leave and then they’re there when you come...
Read more